Over the weekend, I took my kids to a local Toys ‘R Us store. One of my friends texted me to let me know that the store had their LEGO sets on sale at 30% off. It was the moment I had been waiting for ever since Toys ‘R Us announced that it was closing all of their stores several months ago.

Originally, I wasn’t planning on taking my kids with me but as I thought about it, I realized it was unlikely that they will ever step foot in a toy store again. I don’t mean to sign overly dramatic but think about it. How many toy stores are there? Not many. There are some privately owned ones or stores that specialize in games or educational toys. The Walmart or Target toy aisles don’t count either. Buying toys on Amazon is even less fun. Plus, my kids are getting to an age where it won’t be cool to go into a toy store anyway.

I have fond memories of a local big box toy store called Children’s Palace. When I was a kid, Walmart didn’t have all the toys that they have now and it was a special treat for me to walk into Children’s Palace and see their aisle of G.I. Joes. It didn’t happen very often but when it did, it was a big deal to me.

I think it’s a little sad that toy stores aren’t really going to be a thing for future generations to enjoy.

Anyway, I took my three kids with me to Toys ‘R Us. I gave them each a little bit of money to spend. Everything was on sale and I mean everything. Most things were 50% off. They even had price tags on the little scanner guns that the worker used to scan our purchases.

I ended up getting four new LEGO sets and saved a small fortune. Camden got a drone. Maddie picked out a bunch of small toys. Ethan got a couple of Xbox games.

Ethan proudly shows off his new games. I can’t tell you how rare it is to get him to smile in a picture. 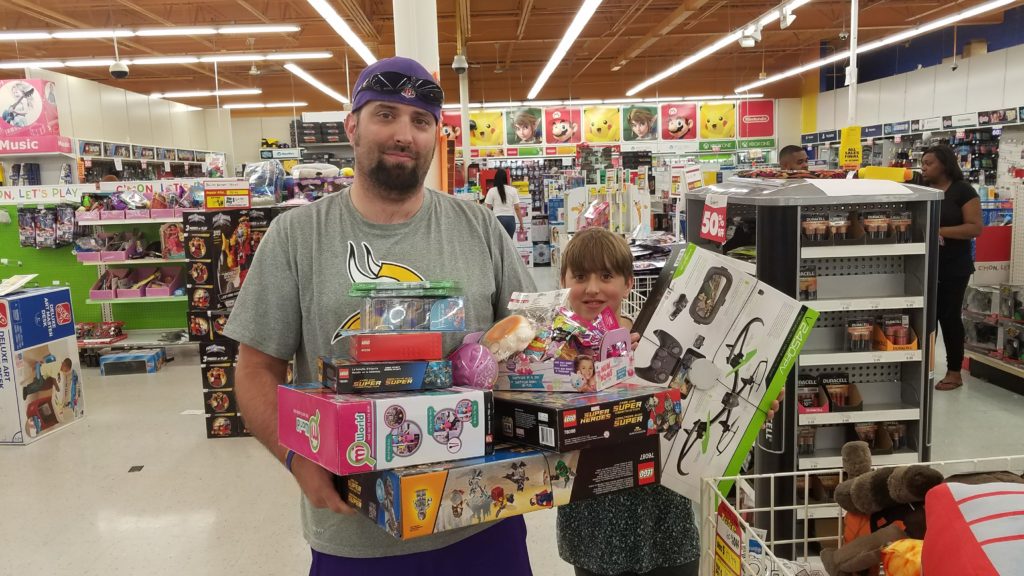 I ended up carrying most of the toys because we didn’t bother getting a shopping cart. I’m not sure they had many carts anyway. I think they sold a lot of them.

Overall, it was an enjoyable experience for us but it was a little bittersweet knowing that I probably won’t be able to take them into another big toy store. I guess that’s also part of them getting older. They’ll be moving onto other things anyway.

It’s too bad that someday I won’t be able to experience taking my grandkids for a shopping spree at a toy store. I guess I’ll have to settle for Walmart or Target. Or maybe there will be some kind of virtual reality experience.

No matter what, it won’t be the same as exploring the aisles of a big toy store.