Cracker Barrel has a whole display for adult coloring books.

Sometime last year, I was introduced to a new, but familiar concept, adult coloring books. They are like the coloring books from when you were a kid, but without the cartoon characters. Their pages are filled with things like animals, snowflakes and abstract shapes. The books are promoted as a stress-reliever for adults because they allow a temporary escape from reality.

My Mom had asked me if I had heard of them and since then, I’ve had friends talking about them on Facebook and seen displays in bookstores and other retail stores (like Cracker Barrel).

Throughout most of my childhood, I loved to draw. In high school, my parents bought me a drawing table and I spent countless hours drawing my favorite sports teams’ logos (and other designs) and then coloring them in with colored pencils. When I went off to college, I stopped drawing and hadn’t picked up a colored pencil since. That is until my parents got me an assorted selection of adult coloring books (and a brand new pack of colored pencils) for Christmas.

Below are three of the coloring books I got for Christmas. 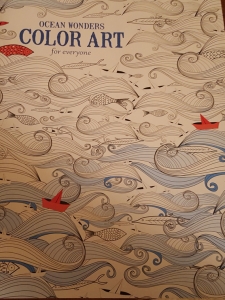 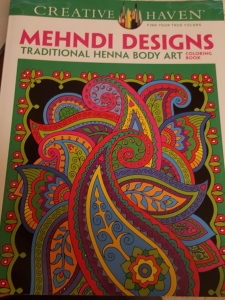 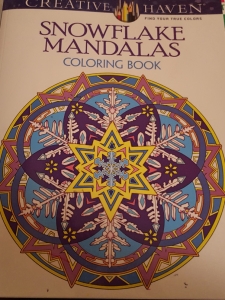 I was intrigued by the idea of sitting down for some time by myself and coloring in some pages. I thought maybe it would get my creative juices flowing again and I’d be able to relieve some stress at the same time.

Right after Christmas (when I was on vacation), I tried coloring with my kids but they just ended up fighting over which pages they would color and who’s turn it was to have whatever colored pencil. Seriously, imagine a four-way argument between myself and my three kids. Then, I just ended up yelling at them and getting more stressed.

My wife tried coloring too but ended up frustrated at how long it took to color in the pages. Plus, she’s a perfectionist and didn’t like when she colored outside the lines. In her defense, the some of the designs are pretty intricate and require a very sharp pencil. Here was my first attempt at coloring in a page. I ended up abandoning it because it was getting on my nerves (and I made some mistakes with my coloring).

About a month ago, I decided to give the coloring books another go. I sat down at my dining room table, picked out my favorite page and got started. It took me three hours to color one page. Three hours for one page! Granted, the three hours was spread out over several evenings but during my “de-stressing time,” I endured arguments/fights between my kids, between my wife and kids and I’m pretty sure I did some yelling in there too.

It was not relaxing at all.

I felt like that stupid page was never going to get colored.

The only reason I kept going was so that I could say I finished it and so I could write this blog post. This page took me three hours! Why did I pick a ram? I don’t know but I hate rams now.

Maybe I picked the wrong page to color. Or maybe I’m just not cut out for coloring books any longer. Fortunately, my kids are now at the age where I probably won’t see many more Scooby-Doo or Dora the Explorer coloring books lying around the house.

I think I’ll stick to playing video games or even woodworking as my primary stress-relieving activity.

I’ll leave the coloring books for the kids.