At this time 10 years ago, I had a video gaming retail business called the Louisville Gaming Center. It was a place where gamers could come in and play with video games with their friends. We had all the major consoles (Xbox, PS2 and Gamecube) and popular games at the time. There were eight stations with four seats each that were all linked together. Xbox Live wasn’t available yet and there wasn’t really any way for gamers to play with each other without being in person. Our plan was to hold tournaments and other events. The idea for the LGC came after we established a local gaming community, the Louisville Video Gaming Association. Below is the story of how it all went down.

How it All Started

Back in 2003, some friends and I got together and played Halo (for Xbox) on a very regular basis. This was before any of us had kids and we actually had time to kill (pun intended). We found out about a big Halo tournament taking place in Nashville, TN. It was a short three-hour drive for us and as far as we knew, we were decent and had a chance to win the tournament.

Of course, we didn’t win anything. We got waxed. It was like a middle school basketball team (us) playing against the Miami Heat (everyone else). We weren’t even competitive. It was a pretty humbling (and slightly humiliating) experience. You have to remember that this was back before Xbox Live so we didn’t have anything to measure ourselves against. We honestly didn’t know that we were that bad.

The good news is that I saw how horribly organized the tournament was and thought that I could run my own tournaments (and possibly parlay my love for video games into a business in the process).

At the time of the tournament, I was working for a local newspaper. One of the perks of working there was that I could run ads for free. When I got back from the tournament, I started running ads looking for local video gamers that wanted to get together and play Halo. Over a short period of time, we built up a local community of gamers and organized our first tournament. We used a friend’s apartment complex’ clubhouse and had 32 people participate.

Afterwards, my friend Chris and I officially started the LVGA and set up a website (because that’s how you become official). As we started to build a following, we hosted other tournaments and organized weekly get-togethers.

As the momentum and activity started to build, I started thinking about how I could start my own video gaming business and make a living off of my passion for video games. I had built a thriving community of local gamers and was excited about the future.

I surveyed hundreds of local gamers on the LVGA website and felt like there was a demand for a video gaming center where people could show up and play with their friends. So I decided to move forward with a retail business. A partner and I opened the Louisville Gaming Center (LGC), Louisville’s FIRST console-only gaming center, in December 2003. We planned to host tournaments, leagues, b-day parties, lock-ins and corporate events. Since video gaming had become so popular, we thought it would be a great place for friends to get together and play video games. The LGC got great local press from local newspapers and TV stations. I even went on a live morning show to talk about the LGC.

Unfortunately, we didn’t do as well as we had hoped. We didn’t have a good business plan and the idea was too far ahead of it’s time. Plus, retail businesses can be hard on a family. I was trying to manage the business, work part-time at the newspaper and my son had just been born. The idea just didn’t catch on. We decided to close shop after four months.

It was a great learning experience for me and I’m definitely happy that I gave it a whirl. I rarely think “what if…” about the whole situation but I imagine that it would have been a different outcome had we had the social media and digital marketing opportunities that businesses have today. We built a community before social networks and I’m proud of that.

In the end, it was a great experience and I met a lot of great people that I’m still friends with today.

Below are some pictures from the gaming center to give you an idea of what kind of set up we had. Back in 2003, flat screen TVs weren’t as readily available (or cheap) as they are today. Click on the thumbnails to view larger images. 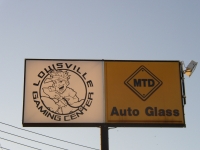 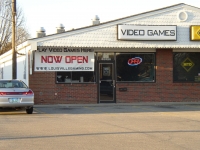 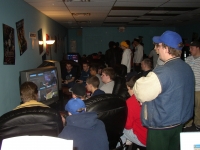 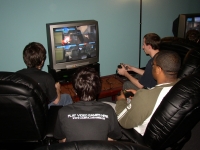 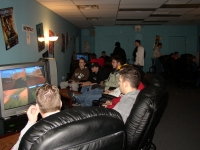 On a personal note, this blog is my first public video gaming-related venture after closing down the LVGA and the gaming center over 10 years ago. I’m happy to be back. Video games are part of my DNA and always will be.