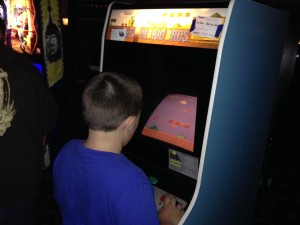 Last Saturday, I took my sons to the Louisville Arcade Expo, a local event where attendees can bring in their own arcade games, pinball machines, classic consoles and old PCs. I heard about it from a friend and thought it would be fun to check out since I was a huge gamer back in the day. I was more of a console gamer but I still enjoyed arcade games. I have fond memories of playing them at a pizza place we went to when I was a kid.

Going to the event, I didn’t know what to expect. I wasn’t sure if we were talking about 50 people or 500. The kids were asking me all kinds of questions about it and I kept telling them that we had to wait until we got there to find out.

Our first sign that the place was packed was when we pulled up to the hotel convention center and there weren’t any parking spaces. After I paid my $20 to get in (kids were free) and we walked into the event ballroom, I was immediately blown away by how many people were there.  The room was packed. There were games every where. They had some large projection screens where people were participating in a tournament.

I wanted to walk around and check everything out before deciding what to play my boys just wanted to play something. The problem was that I wasn’t exactly comfortable letting them run wild in the place. The overhead lighting was dimmed (for better gaming visibility) and I was worried that I’d have a hard time finding them if we got separated. 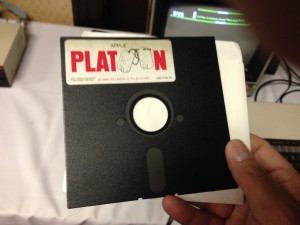 We watched some kids play Goldeneye on Nintendo 64. I had flashbacks of playing it with my friends when I was a teenager. After the kids got up, my boys gave it a whirl. I don’t typically let them play violent games but I thought a few minutes wouldn’t hurt anything. They also played pinball, some arcade games and we checked out a few systems (from Japan) that I had never seen before. I heard that they had Oregon Trail but was disappointed when I couldn’t find it.

After about an hour, the kids were ready to go. Instead of making them stay, I thought I could come back later in the evening by myself before they closed up.

Unfortunately, I didn’t go back because I wasn’t feeling well that night. Now I regret it.

It was cool walking around and seeing all the systems and games that I played as a kid. It was a nice, albeit short walk down memory lane. Even if I was only there for an hour, I still enjoyed it.

One of the things I accepted about being a dad a long time ago is that I don’t always get to play video games when I want and I’m okay with it.